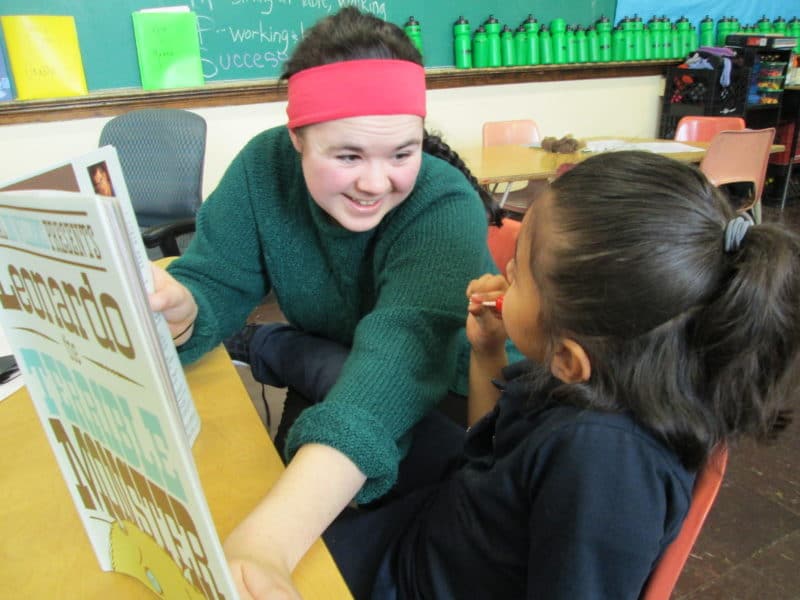 She worked at an inner city children’s program in another city during high school, and she loved the children and other volunteers very deeply. She planned to move to the inner city after graduating high school, but then a series of events occurred which forced her to leave those children and the ministry abruptly against her will. She was devastated, and fell into a season of depression for almost a year. For two or so years after, she closed her heart off to loving again. Since then, she has gradually regained that ability and desire to love again. However, she never reentered city ministry with children until this fall.

When she first came to New Life Centers, she was afraid to love the kids because
she knew she had to leave them at the end of the year. She was afraid of that year of depression coming back. She kept replaying the night she left the ministry in the other city in her mind. She only said goodbye to two of the kids she had closely worked with, and they both had tear-filled eyes and begged her not to go and questioned her about why she had to go. She thought it would be too hard to say goodbye to the others, so she didn’t. Shortly afterwards the ministry shut down. Although there were plenty of other churches in the city they could go to, she felt like she had betrayed and abandoned those children. She regretted not saying goodbye, and not leaving those kids with one final message of God’s love and hope for them. She mostly regretted never telling them she loved them.

After a few months of being at New Life Centers, she realized she had started to love the kids and started accepting it. Tamiah reminded her so much of Zarrianah, one of her little girls from the other city. The first time Tamiah said, “I gotta use it,” (referring to the bathroom) her heart ached a little to hear the words again for the first time in 7 years, but she smiled as well, realizing God was giving her a new chance to love a new little girl.

The last official week of her volunteering, she realized half way through the night that she had not prepared herself for another “last night.” Several of the kids were emotional for various reasons and Tamiah was one of them. As Hannah held Tamiah as she cried because her sister had been mean earlier in the day and because now she was afraid some of the kids didn’t want to play with her, Hannah got to cry too and hold her and tell her all the things she had regretted not telling her kids at the other after school program. Hannah told Tamiah that God loved her and she did too, and she whispered words of hope and encouragement in little Tamiah’s ear. Hannah told her that might be her last week at Centers forever and told her goodbye just in case it was. But just like in the other city, that one goodbye hurt too much to say any more goodbyes. So she didn’t say goodbye to any of the others.

Then Ms. Jessica handed Hannah an envelope before she left with two prayer cards and when she opened it on the bus, Tamiah’s was one of them. Ms. Jessica had no way of knowing that Tamiah represented all the kids she had left behind, and the second chance God was giving her to finish a ministry in the city. She cried the whole way home on the bus, and when she got home she took some time to think and pray through some things. She decided she was going back for one last night, because she needed to be able to have some closure and finally say goodbye so in the future she would know she really did have the ability to leave well.

She is so glad she came back for that last week and said goodbyes. She felt like God really used those last goodbyes, and the whole year really, to grow and heal her and to give her hope for future ministry. The purpose of volunteering is to serve and give hope and healing to others, but she feels like New Life Centers served and gave hope and healing to her.